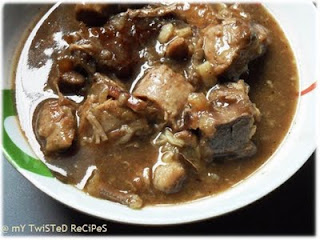 Been looking at the empty screen of my computer for about 30 minutes thinking on how to start this entry on Paksiw na Lechon when I suddenly asked myself, "Is Lechon an original from the Philippines?  If not, where did it come from?  Why is it called 'lechon' anyway?"
Good thing I am living in the era of internet, I consulted Mr. Google and found out that lechon was brought to the Philippines by the Spaniards when they occupied the country in the 16th and 17th century.  The word 'lechon' came from the Spanish word leche which means milk, thus, as far as my research has reached me, only suckling pigs or pigs which are 2 to 6 weeks old, (have only eaten mother's milk) are being made into lechon.  Philippine Lechon is normally eaten with a liver-based sauce.
Eventhough lechon is a very popular dish here in the Philippines (and almost everyone likes to eat them) during festivities or parties, leftovers cannot be avoided.  But since Filipinos are very creative, several dishes came about using lechon as an ingredient and one of them is Paksiw na Lechon.
A week ago, a friend of mine who is visiting Manila brought the popular lechon Cebu - the Cebuanos version of this dish - more tasty and juicy I should say.  It has a distinctive taste different from the normal lechon.  I told myself that I will leave some and make some stew.
Here's how I did it.
Ingredients:
400gms lechon, cut into serving portions

3 gloves garlic, pounded
1 medium onion, diced
3 to 4 whole bay leaves
1/2 tsp whole black pepper
6 cups water
1 and 1/2 cups lechon sauce (I used Mang Tomas All-Around-Sarsa)
1 and 1/2 Tbsp Sukang Paombong (or any cane vinegar)
Cooking Instructions (so easy)
In a deep casserole, combine all ingredients except for the vinegar.
Bring to boil.
You may want to watch TV or surf the net or chat with friends while waiting.  This will take a while - but remember to take a peek and stir once in a while :D
After an hour, your dish will somehow look like this: 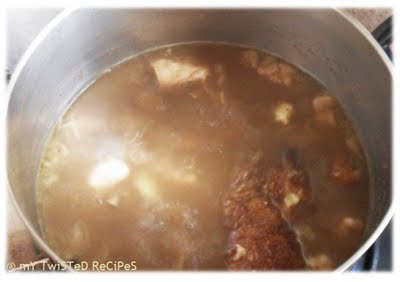 Lower the heat and add the vinegar.  DO NOT COVER and DO NOT STIR for about 10 minutes.
Continue simmering for another 30 minutes or until the liquid is reduce to half.
Serve hot with steamed rice.
NOTE: This dish tastes even better after a day or two :D
Posted by Unknown at 9:36 AM 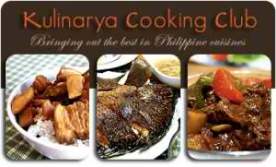